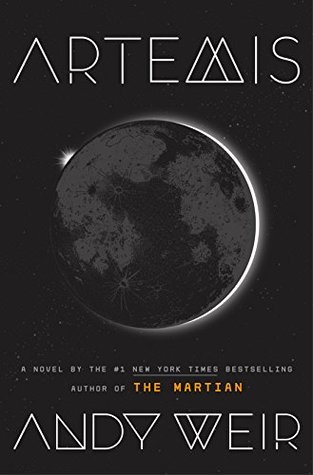 I love the cover of this book, I loved The Martian, and I usually enjoy Andy Weir, so how was Artemis?

Ugh! Why, why, why?? First what was this book about:

Jazz Bashara is a criminal.

Well, sort of. Life on Artemis, the first and only city on the moon, is tough if you’re not a rich tourist or an eccentric billionaire. So smuggling in the occasional harmless bit of contraband barely counts, right? Not when you’ve got debts to pay and your job as a porter barely covers the rent.

Everything changes when Jazz sees the chance to commit the perfect crime, with a reward too lucrative to turn down. But pulling off the impossible is just the start of her problems, as she learns that she’s stepped square into a conspiracy for control of Artemis itself—and that now, her only chance at survival lies in a gambit even riskier than the first.

Alright now let’s discuss it. First the world itself. I didn’t have a problem with the concept of this world, I found a lot of it believable I just thought it lacked depth. There were so many different cultures or places and I felt they were there just to add variety but not really delved into. It felt very shallow. What wasn’t shallow was the math and science, which was also a problem. I come from a big geek community and I felt it was excessive. There was just too much techno blabber that means nothing if your not a specialist in that field. Cool for one character to do but not for so many or so much of the book.

I disliked Jazz, a lot, which was a problem. I found her inconsistent and unlikable. She used people with no remorse, who cares if they lost their jobs or lives she had a plan. Also she would inconsistently have confidence issues, one moment she had none and the next she was James Bondish. I was finding it hard to believe who she was let alone get behind her ideas. The other characters, the ones she spurned and used however, the always seemed to come around to supporting her. It got so bad I kept hoping she would fail.

Ultimately I was disappointed with this book. I’m not giving up on Andy since I did love The Martian so much I’m hopeful the third book will be the charm.

I'm a nerd. Kinda got that from my website huh? Fine I'll tell you more. I have a small book obsession. I'd like to say I read anything as well but truth be told when in doubt I'll always go back to my first loves, fantasy and scifi. Read it and we haven't discussed it? I love a good recommendation. Don't agree with me? I live for a great debate. View all posts by Karen